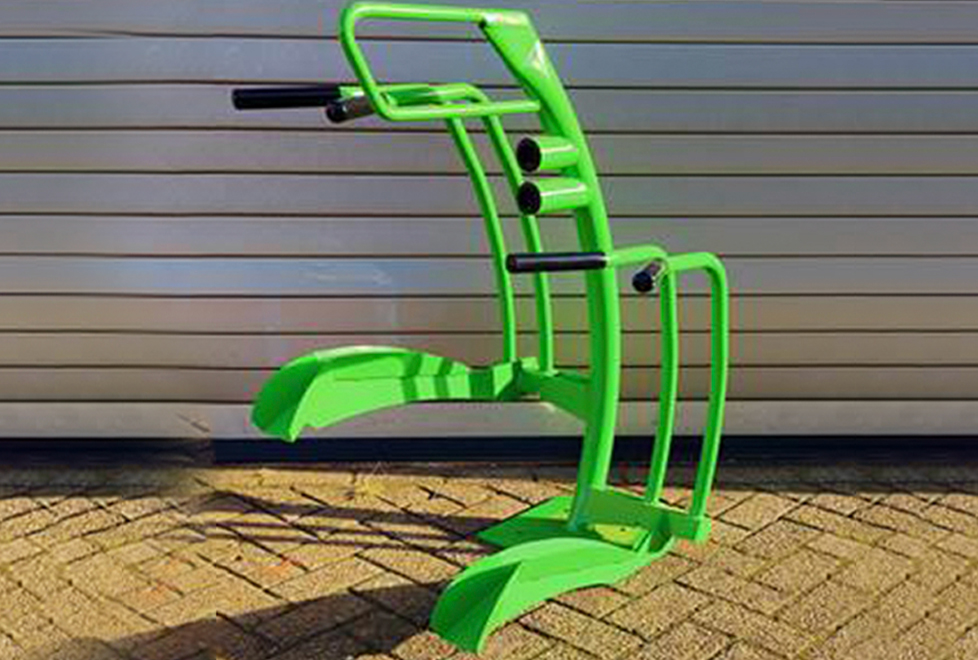 Maurice Paulssen: “I make products I wouldn’t mind having myself.”

Maurice Paulssen has been developing products all his life. For example, he developed products for the car industry that were sold across the globe. Now he is active in the world of bicycle parking, with the Eindhoven-based company MB Fietsparkeren. Innovation is his passion: “I look at a product and I think: how can I make it better and more beautiful and sell it too!”

Through a relation who rented out bicycle parking spaces for events, he became involved in the creation and installation of bicycle stands in 2009. This gave Paulssen – a keen cyclist in his free time – the idea for better, more user-friendly bicycle parking.

Universal system
“My system is different because it is suitable for every type of bicycle”, says Paulssen. “It works by way of automatic clamps on the front fork. E-bike, normal bike, racing bike, transport bike, or a bike with a crate on the front: every bike is held upright.” This ensures ease of use and orderly bicycle parking. “At bicycle parking locations with traditional wheel stands, you will often see electric bikes and also other bikes parked next to the stand. Why? People are afraid the wheel won’t go in properly and warp the rim. This can never happen with my system.”

Suitable for racked parking
Paulssen patented the system in 2010. All MB Fietsparkeren’s parking locations are based on this system. You can recognise them by the V-clamp with the sloping groove for the wheel. The system is also practical for racked parking where bicycles are placed one above the other. “In conventional bicycle parking, you have to push the bike to the top, which is difficult, the bike becomes heavy. It is much more convenient for the bike to be able to move up and down horizontally. For this purpose, I have devised a lift for multiple racks on top of each other. This just moves up and down. The lift is not suitable for a train station where lots of people come and go at the same time, but it does work well in an apartment complex or company bicycle stands, for example.”

Three systems
MB Fietsparkeren has launched three bicycle stand designs on the market. You can see them all around the Netherlands: at Scheveningen beach, in Groningen at the Hanseatic University of Applied Sciences, and in various Limburg municipalities. You can also see them at several locations in Belgium, such as Aalst city centre. “The bicycle parking systems all work the same way, but are different in design and exterior. The MB ECO is the basic system. The MB BASIC has a more high-end design, with extra sturdy lock fixings. The crème de la crème is offered by our newest bicycle parking system: the MB Wave. This system can be fitted with integrated charging points for electric bicycles,”

Production in the Czech Republic
The stands are made from galvanised steel. MB Fietsparkeren outsources its production. “Drawings and parts lists all get sent to the production partner. I carry out the final inspection of the products supplied.” Experience was gained with various production partners. “We eventually found SixPointTwo. Their head office is close by: in Weert. It makes things easy for the final inspection. The contact is important too. I will get an immediate response to a question, I don’t have to chase it up by phone or e-mail.” Also important – of course – is the quality of the Czech-made products. “Radiuses or weld thicknesses: everything is made exactly in accordance with the drawing. In theory, this should be the case with other partners too, but in reality, there are differences. SixPointTwo just makes very good products.”

Constant innovation
Paulssen expects a lot from an innovation that will soon be launched: infrared sensors. “The idea was awarded the Intertraffic Award in 2014. Now the software is completely ready, and so is the market.” The infrared sensors are placed in the wheel groove. Once a bicycle is parked, a timer is activated. “One person can look at the PC screen and see where each bicycle is, how long it has been there, and when a bicycle is removed. Wardens can take a targeted approach to the issue of abandoned and stray bikes. What’s more, there is a constant overview of the capacity utilisation of the bicycle parking facilities: useful for determining whether they are actually in the right location.” In the event of bicycle theft, camera images can be viewed quickly. In short, very interesting for large companies, student campuses, and local authorities!”